For the first time in 2021, the Statistics Austria and Austrian Institute of Economic Research Vienna’s (WIFO) Regional Tourism Satellite Account (RTSA) has made it possible to compare individual federal provinces (except Vorarlberg). The province of Vienna ranks second, both in terms of tourist spending as well as direct and indirect induced economic impact – behind Tyrol, and ahead of Salzburg. Around one fifth of induced economic impact attributable to tourism in Austria is accounted for by the province of Vienna.

The latest statistics from the RTSA relate to the 2018 reporting year and give an insight into developments before the outbreak of the coronavirus pandemic. According to the numbers published by Statistics Austria and WIFO, the economic impact induced by tourism in Vienna amounted to an annual EUR 5.6 billion, with EUR 4.7 billion of this amount remaining in the capital. Consequently, Vienna generated an economic impact of EUR 900 million for the rest of Austria, meaning that around 15% of the value added induced by the Viennese tourism industry benefited the rest of Austria. As a result of the strong economic output attributable to other industries in Vienna, tourism “only” contributed 4.8% of Viennese GDP. Extrapolated nationwide, this figure rises to around 20% of tourism-related induced economic impact.

In terms of income from tourism-related demand in Vienna – generated by segments such as accommodation, entertainment, culture, hospitality and transportation – Vienna is also out in front: at EUR 7.175 billion, Vienna achieved second place behind Tyrol and ahead of Salzburg.

One in nine jobs in Vienna attributable to the industry

Tourism induces a significant economic impact in the country and creates jobs that are tied to specific locations – in terms of city tourism in Vienna, this primarily reflects year-round employment rather than seasonal labor jobs. Full-time equivalents and types of employment in the Vienna leisure and tourism industry were analyzed as part of the Statistics Austria and WIFO’s RTSA. During the pre-pandemic reporting year (2018) around 12% of jobs (full-time equivalent: 11.4%) in Vienna were related to tourism and leisure. In numerical terms, this translates into 131,200 jobs (103,300 full-time equivalent) for people living and working in Vienna.

Culture and congresses: quality tourism the route to success

Cultural and congress tourism – both areas in which the capital excels – are the foundation of Vienna’s strong performance. They are also sustainable since the offerings and infrastructure that these segments depend upon are also used by local residents. At the same time, these two segments consist of visitors with high spending power. Analysis carried out by the Vienna Convention Bureau as part of its regular Vienna Meetings Industry report shows that with a daily outlay of EUR 541, the average congress guest spends more than twice as much as other visitors to the city (EUR 276). Nationwide, this figure is EUR 188 (all values from 2019). 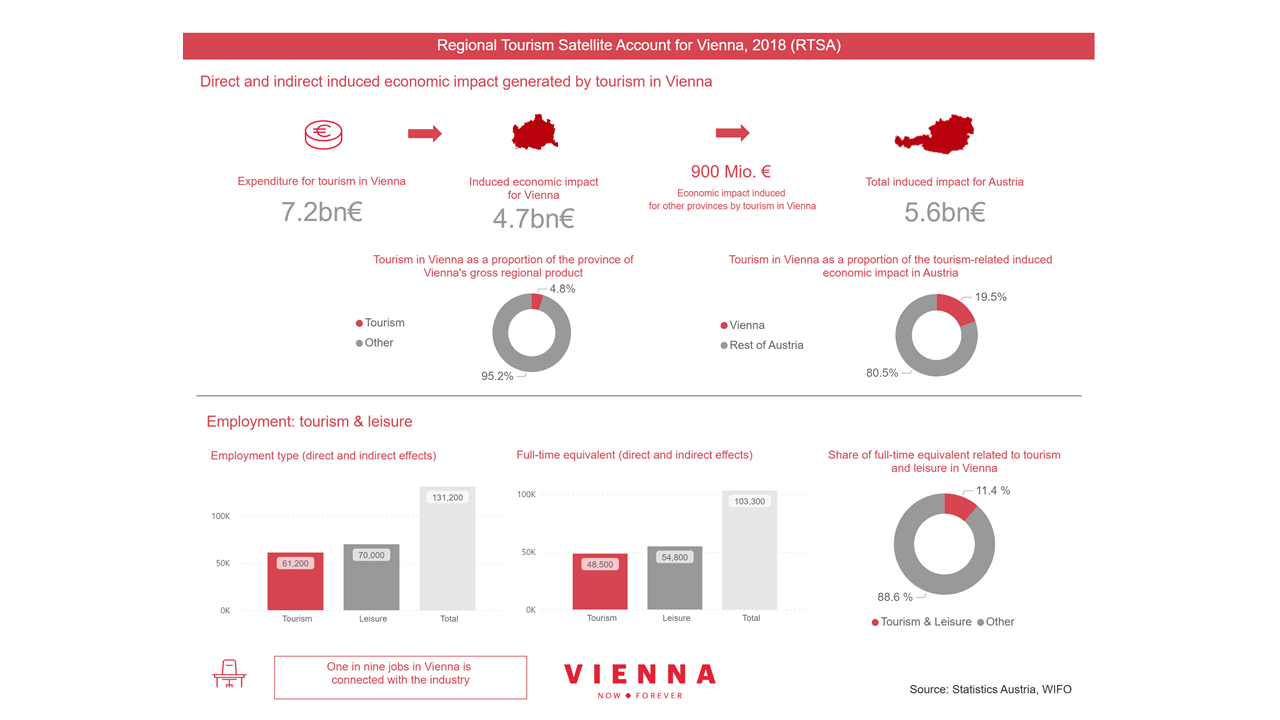