Vienna Film Incentive: driver for the visitor economy and Vienna as a film location

• City of Vienna unveils EUR 2m international film fund • Hanke: “measure with strong potential to unlock synergies for tourism and economy“ • Applications open now at filmincentive.vienna.info • Vienna Tourist Board to serve as point of contact and processing body • TCI-Research: one out of ten visitors decide to come to Vienna because of a film

23.03.2022 - Vienna – the setting for around 80 international cinema and TV productions in 2021 alone – has launched the Vienna Film Incentive. Open to both conventional film productions as well as television series, it is also clearly aimed at productions for streaming providers. “The Vienna Film Incentive is a contemporary funding instrument. By extending the scope of funding to formats produced for streaming providers, it reflects the latest developments in the filmmaking industry,” explained Executive City Councilor of Finance, Business, Labor, International Affairs and Vienna Public Utilities Peter Hanke. “This funding scheme should be seen as a source of assistance with ties to the tourism industry. It is intended to benefit Vienna’s visitor economy – both from a business and tourism perspective,” he added.

“Under the Vienna Film Incentive, the City of Vienna will be investing EUR 2m between now and the end of 2023 to help inspire international filmmakers to shoot their productions in the city. Funding is open to international productions that are filmed wholly or partly in Vienna and include a minimum of two full days of filming. Besides primary economic effects such as the value added that productions generate directly on site and the associated employment implications, we are also specifically focusing on image building for tourism. Using Vienna as a filming location not only translates into commissions for local business, expenditure on accommodation and hospitality for film crews, but also pays dividends over the long-term in terms of the city’s attractiveness as a tourism destination. Which is why the decision was taken to entrust the Vienna Tourist Board with operating the new Vienna Film Incentive,” Hanke confirmed. “By extending the fund to include video on demand services, we want to give the fastest-growing segment in the international film industry the attention it deserves.”

Productions such as the recent Tyler Rake: Extraction 2 shoot in Vienna at the start of the year, starring Australian actor Chris Hemsworth, highlight the growing significance of streaming services when it comes to international blockbusters. Something that was confirmed in September 2021, when the UNWTO and Netflix published their joint Cultural Affinity and Screen Tourism study: in 2015, Netflix was available in 50 countries, a figure that had risen to 190 by 2017. Amazon Prime Video racked up 100 million new users in 2019 alone. And with more than 70 million viewers by October 2020, Disney+ had achieved its goal for 2024 despite only going online in November 2019. Reports indicate that Netflix spent more than EUR 5m on filming Extraction 2 in Vienna. Preparations ran for around half a year before shooting began on site, and around 900 Austrian and international film workers were involved in the project. Conventional productions first shown in cinemas also generate considerable investment: Mission Impossible – Rogue Nation (2015) is believed to have accounted for a total spend of EUR 3.5m in Austria, as well as bringing Tom Cruise to Vienna, where he could be seen abseiling from the State Opera House. Truly inspirational scenes that were witnessed by an estimated 69 million cinemagoers worldwide.

Kettner: video an integral part of the image building toolkit

The Vienna Tourist Board was selected as the point of contact and processing body for the Vienna Film Incentive. Director of Tourism Norbert Kettner revealed the thinking behind it: “Film images have been an integral part of the image building toolkit for every destination ever since moving pictures were first shown to an audience in 1895. And now this new source of funding is helping to expand our portfolio: in addition to conventional international marketing communication activities, we are now in a position to instrumentalize film funding as a way to raise awareness among prospective visitors. This is of particular relevance when it comes to establishing ourselves in far-away markets, where we are looking to increase recall values for Vienna and boost the city’s image by harnessing the potential of popular culture. Through our regular visitor surveys – conducted most recently in 2018 and 2019 – we know that visitors’ interest in the destination was piqued by film, television or radio in about 8% of cases. The potential that we are looking to unlock through the Vienna Film Incentive is far higher than that, as our partners at TCI-Research have confirmed.”

The Travelsat-Index compiled by Brussels-based international online market research company TCI-Research revealed that around 100 million travelers selected their destination chiefly as result of films between 2017 and 2019. The findings also underlined Vienna’s competitive advantage over its European peers. This was borne out by responses to the question of how much films influenced people’s choice of travel destination. The data behind the film-induced attractiveness index reveals how appealing a location is for film fans and how important film is for choosing a travel destination. Vienna was significantly above the European benchmark of 100, with a value of 170. Further examination of the data showed that one in ten visitors to Vienna primarily selected the city due to a film. “Films and tourism marketing complement one another perfectly,” Kettner concluded.

According to TCI, visitors whose choice of destination is inspired by films are generally around 10% more receptive to destination marketing than the overall average for all visitors, and also tend to travel more frequently in the off season. At the same time, they are more active sharers of their travel experiences on social media (27% higher) and are more likely to contribute recommendations than the average traveler (6% higher). They take part in more cultural or nature-related activities than average (19% higher) and are also more satisfied with most aspects of their stay. Among this cohort, satisfaction rates for tours and excursions (31% higher), landscape (21% higher) and leisure and cultural variety (29% higher) are likewise above the benchmark. This trend is particularly pronounced among millennials and visitors from high-spending markets such as China and the Gulf States.

“The influence of films not only opens up opportunities in terms of destination marketing, it also brings new openings for Vienna’s visitor economy, such as developing experience-based tourism products to help satisfy growing demand from travelers in this segment. We have already seen this to impressive effect with the 1949 film The Third Man, which inspired a Viennese museum and a sewer tour. Done properly, film tourism can have a lasting positive effect on the visitor economy and brand building,” Kettner noted.

Under the Vienna Film Incentive, funding is provided solely to cover expenses incurred in Vienna, which in turn enhance the city’s standing as a business location. Funding is available for international fiction and non-fiction productions that involve at least two full days of filming in Vienna and last a minimum of 45 minutes (for series, the lengths of the individual episodes can be counted together). Another requirement is that an Austrian film production service company has to be on board. Applicants also need to confirm whether the production is destined for release in cinemas, on TV or as video on demand. In the case of films, the total production costs must amount to at least EUR 4m, and at least EUR 500,000 for documentaries (applicants must provide proof of qualifying production costs for the corresponding amounts). Details of costs, financing and scheduling must also be submitted. Funding can be provided for a maximum of 30% of the qualifying production costs. The upper limit for funding is EUR 400,000 per project.

Company productions, advertising or promotional films, entertainment shows, magazine and reportage features, as well as recordings of theater, opera or concert productions are not eligible for funding. Applicants must also complete a checklist which uses a points system to evaluate various factors, including how many scenes are set in Vienna and what locations are used. It also provides information on whether the film is based on existing content such as literary works with ties to the city, identifies whether topics with a link to Viennese culture or society are covered and establishes the extent to which Austrian film service providers are involved in production of the film. Funding is only awarded if the project meets the required number of criteria and achieves the minimum number of points stipulated.

Submission through the Vienna Tourist Board – applications now open

Applications can be made at any time between now and December 31, 2023, or until all of the funds have been allocated. Submissions must be made online at https://filmincentive.vienna.info. The website also contains all of the information required for an application as well as the complete Funding Guidelines. After checking, applications are processed on a first-come, first-served basis.

Back in 1922, when the movie industry was still in its infancy, Vienna was selected at the location for Sodom and Gomorrah: The Legend of Sin and Punishment. Filming took place at Kurpark Oberlaa and various other locations in the tenth district. Thousands of actors, extras and crew members were involved in making this legendary silent movie. Set-jetting is the name of the modern-day trend that sees film fans travel on holiday to the locations used to film their favorite shows and movies. However, film tourism has been around since the middle of the last century. Shot in Vienna, classic 1949 British film The Third Man – ranked 57th in the 1998 list of the best American films by the American Film Institute, and was awarded top spot in the 1999 British Film Institute ranking of the greatest British films of the 20th century – is one of the earliest examples of film tourism. Alongside Orson Welles, the Giant Ferris Wheel in Vienna’s Prater Park plays a starring role. The “Sissi” trilogy has enjoyed worldwide success ever since the films went on general release in the 1950s. In a starring role alongside Romy Schneider: Schönbrunn Palace.  Another former Habsburg residence, the Hofburg, once doubled up as Paris as a key location for 1993 tale The Three Musketeers. Starring Charlie Sheen and Kiefer Sutherland, shooting was transferred from the banks of the Seine to the Danube. At one point, 1,000 extras filled the Burggarten, where many of the scenes were filmed.

Vienna comfortable in the role of film star

In 1986 Timothy Dalton played James Bond in The Living Daylights, putting the Prater, Volksoper, Schönbrunn and the Gasometers at the heart of the action. Still very popular with audiences to this day, Before Sunrise, shot in 1994, was somewhat more romantic: Ethan Hawke meets the love of his life on a train and spends 14 hours with her in Vienna. The Albertina, Prater, Hofburg, Danube Canal, Ringstrasse and the Votivkirche church can all be seen alongside Hawke and Julie Delpy. Viggo Mortensen, Keira Knightley and Michael Fassbender were filmed at various Viennese locations, including the Belvedere and the Sigmund Freud Museum, for psychoanalysis drama A Dangerous Method. In 2015 production Mission Impossible – Rogue Nation, Tom Cruise  abseils down the Vienna State Opera. Which, incidentally, hosted the world premiere of the blockbuster. The Austrian capital also provided the set and backdrop for Woman in Gold, which told the story of the restitution of Gustav Klimt’s Portrait of Adele Bloch-Bauer to Maria Altmann in 2006 by the Republic of Austria. Helen Mirren, Ryan Reynolds and Daniel Brühl shared the stage with City Hall, the Belvedere Palace, Hotel Sacher, the Academy of Fine Arts (the former Semperdepot), Judenplatz, Domgasse, Konzerthaus and the State Opera. To be continued!

The complete Funding Guidelines for the Vienna Film Incentive can be downloaded from https://filmincentive.vienna.info. 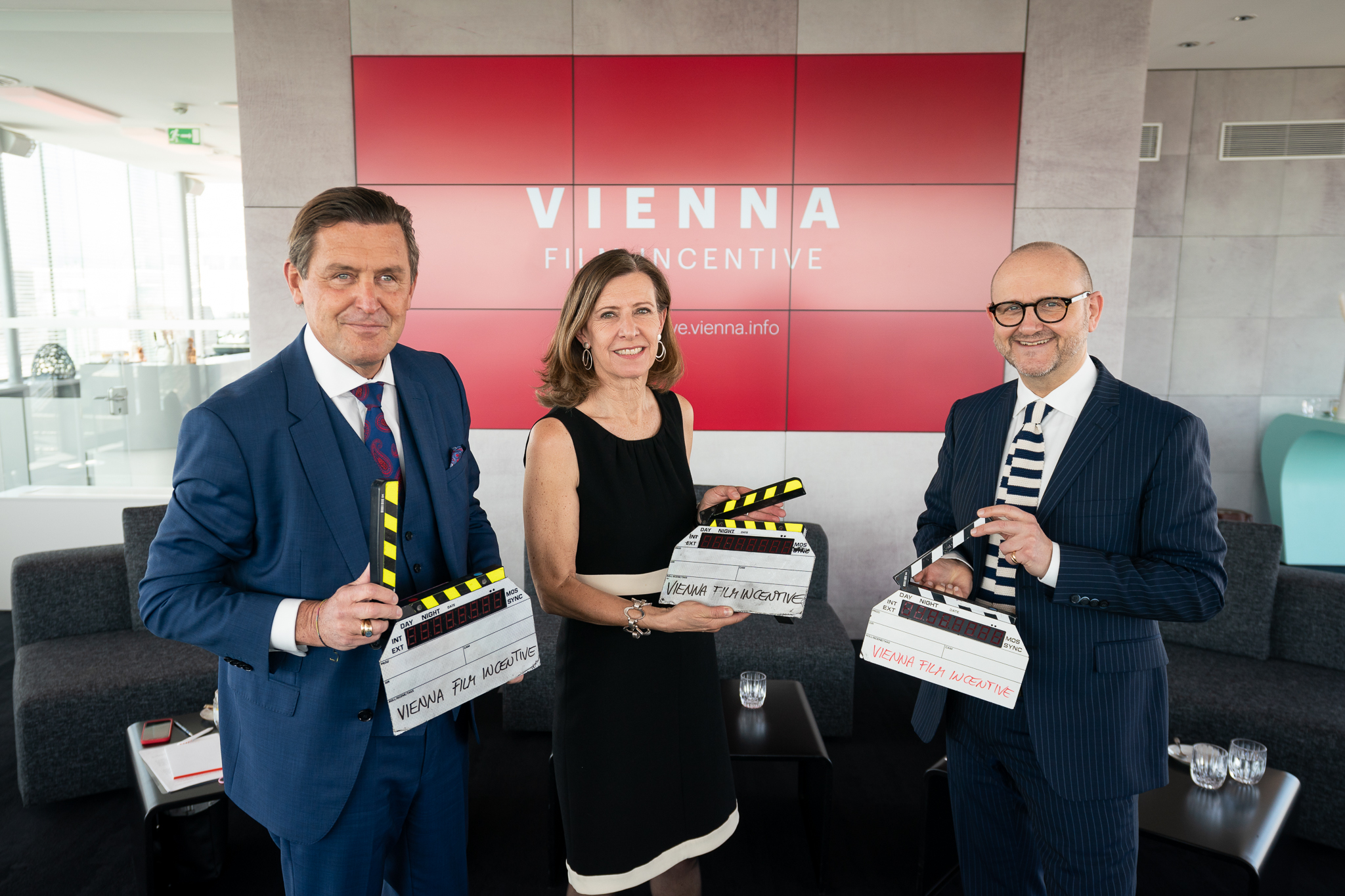