City Destinations Alliance (CityDNA), the leading network of city tourism organizations in Europe, just launched the 18th edition of the “CityDNA Benchmarking Report”. The Benchmarking Report is the main source of information for city tourism statistics today. Vienna’s Modul University is the scientific partner in producing and further developing the report, which includes the latest insights about the performance of European cities.

The Benchmarking Report illustrates the structure and main trends in city tourism of 117 European cities between 2019 and 2021. Detailed analyses feature major developments concerning bed supply, occupancy, CO2 emissions, and tourism densities of European cities. In addition, the report includes detailed information about the performance of the top 9 European source markets.

The COVID-19 pandemic continued to disrupt tourism industry in 2021, although to a lesser extent than in 2020. The following infographic highlights the main results for 2021. 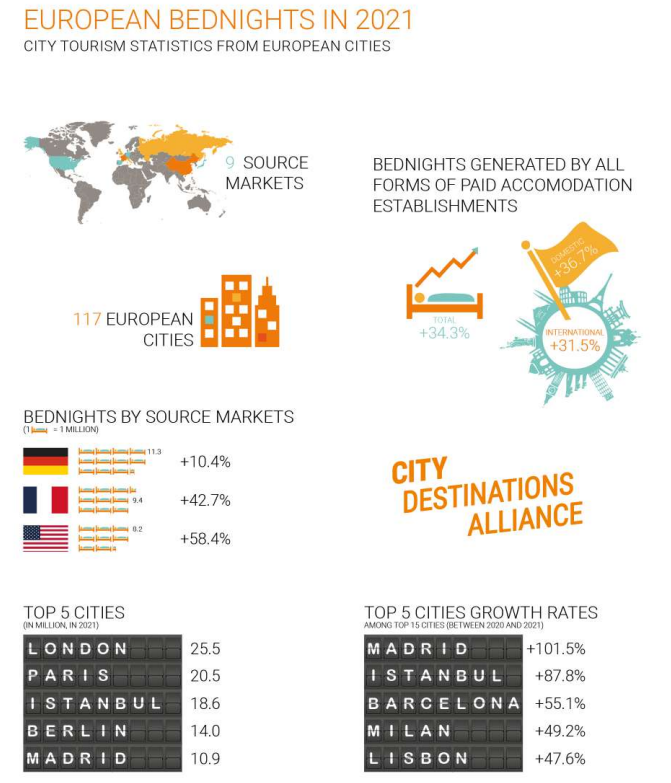 In spite of the immense impact of the pandemic over the past two years, European city tourism is on the recovery path. City tourism has been for many years the most dominant and dynamic aspect of European tourism, and except 2020 which was a turbulent year, 2021 means again positive average annual growth rates in international bednights in both the CityDNA Report cities (31.5%) and the EU 27 nations and UK (12.3%). Top Performing Cities for the year 2021, in terms of total bednights, were London, recording a growth rate of 23.0% from the previous year, followed by Paris and Istanbul which recorded an increase of 44.9% and 87.8%, respectively.

The City Destinations Alliance Benchmarking Report can be purchased in different versions. The light package including the report costs € 450. The professional package including the report and full data file costs € 890. The report (in English) can be purchased following this link. For all CityDNA members the report is available free of charge. City Destinations Alliance has opened up membership beyond cities, inviting also regional and national tourist boards to become affiliate members.

For further information, please directly contact the CityDNA Head Office or visit their website to order the report: