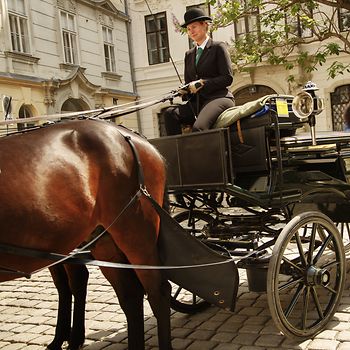 A city like no other – that's Vienna. Vienna is Vienna thanks to the Viennese Originals: above all the people who shape the city. We get to know them in their environment – in the coffee house, in the hotel, in stores, traditional businesses, in the concert hall, in the Prater. In Vienna, however, not only are people originals – the list also includes unique art collections, quirky museums, and events with international charisma. Which – like the Viennese Originals – are to be found nowhere else in the world.

Vienna is the world's most livable city, which has been officially confirmed ten times over by the Mercer Study. But who are the people who shape Vienna and actually give the city its identity? Let's compare Vienna with a Viennese type of coffee: the melange. It can also be said of the city that it needs a certain blend. Different influences, dispositions, and styles result in the Viennese soul: the heart in the right spot, quirky, wallowing, grumpy, grouchy, and melancholy. But at the same time cosmopolitan, tolerant, and generous.

In the case of "Viennese Originals", the focus is on the people. We present them to you. We learn about their life stories and share in their fate and success. Where can find them? – Throughout Vienna.

In the hotel, the receptionist has a sixth sense and can read the customer's wishes in their eyes. In the coffee house, the waiters serve in typically Viennese style. At Café Demel, for example, the female serving staff – called "Demelinerinnen" – always address their guests formally: "Has Sir chosen?" Coffee house owner Susanne Widl is the "senior conductor" at Café Korb, where – just like in the legendary Schwarze Kameel – a potpourri of Viennese types can be found. Entirely in accordance with the motto: Let's go Viennese watching.

Deep in the city's DNA

In the early morning, the employees of the legendary Viennese municipal department MA48 maneuver the orange garbage trucks through the narrow lanes with centimeter precision. The "bin workers" are an institution. Let's listen to their stories about their regular customers in the neighborhood. An insight into the grumpy-sarcastic facet of the Viennese soul is given to all clueless people who fail to comply with the unspoken left-hand traffic rule on escalators. The requests are rich and varied, but please make space ...

The Viennese is very different when he thinks something's good: this can be observed, for example, in the loyal Viennese concert audience, which music stars from around the world throw roses at for its unbridled enthusiasm. Then there's also the Viennese practicing doing nothing. He's skilled at that. Hot tip: a visit in summer to the Gänsehäufel – a lido on the Old Danube and an emblem of Viennese bathing culture. An authentic counterworld to the Prater amusement park is the less well-known Bohemian Prater, where the Viennese go unwind. Where less is more.

Many Viennese identify themselves by their vocation, they live their profession. Craftwork to perfection is created, for example, by Markus Scheer, a seventh-generation shoemaker. Or by Robert Comploj, proprietor of Glashütte Comploj. Or by Jean-Paul Vaugoin, who recounts stories about royal houses in his silversmiths. Music lovers' hearts will glow when they visit luthier Bärbel Bellinghausen. She has also designed specially patented "violin cocoons" – elegant cases for the storage of valuable violins.

Even the very youngest live for music in Vienna: the Vienna Boys' Choir are as world-famous as they are always hungry. Other Viennese originals are the Lipizzaners and their riders, who demonstrate the High School of Spanish riding art. And, of course, the world-famous horse-drawn carriages: here, both the coachmen and the horses are Viennese originals.

Original places – only in Vienna

Vienna is also home to some unparalleled places. Art collections of world renown, with works by Gustav Klimt, Egon Schiele, and Pieter Bruegel. And unique, smaller museums on subjects that you simply have to come and see.

The Viennese is known for having a special relationship with the morbid. The approach of the Funeral Museum is wonderfully bizarre: the museum shop sells cooking aprons printed with "Ich nasche bis zur Asche" (I'm eating myself to death). "The Third Man" by Orson Welles is an international cult movie – everything about it can be found in the lovingly managed Third Man Museum. Around 50,000 exhibits make the Collection of Anatomical Pathology in the Madhouse Tower – NHM the largest collection of pathological-anatomical items in the world. But beware: it's not for the faint of heart.

More contemplative is the Snow Globe Museum, where Erwin Perzy III makes the popular Viennese souvenirs with much love and attention. His grandfather invented the snow globe in 1900. The Collection of Clocks and Watches devotes itself entirely to the measurement of time – with a full sound at the top of each hour. There are also other unusual collections to discover, such as a mini-museum for vending machines and a museum of toilets.

And Vienna's stages, concert halls, and opera houses are more than workplaces for artists and craftsmen: they are their second home. When stagehands, carpenters or lighting technicians divulge their secrets, amazing things appear in the spotlight. Craftsmanship to perfection can be marveled at in the Stadtsalon of the Bösendorfer piano factory. A total of 587 hours of manual work go into a single instrument.

Events for the world

Experiencing Vienna in person, diving into the city – it's about more than just sightseeing. The aim is to get to know the Viennese Originals – above all the people, their peculiarities, their skills, and how they view the world. The speed at which they live. The Viennese way, from Viennese grumpiness to Viennese charm. Open yourself up to all this and you'll get to know the real Vienna. And take away a splash of fresh joie de vivre for yourself.