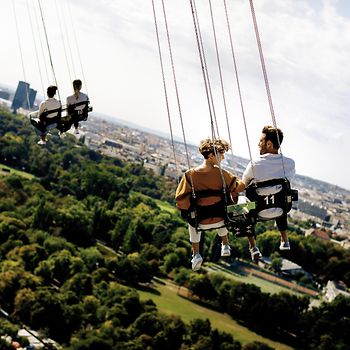 Vienna is a capital of pleasure – just as diverse as the city itself are the possibilities for enjoying it to the fullest and with all the senses. After the privations of recent months, there is a great desire to indulge oneself again, to exploit everything to the fullest, and to break away from the monotony of everyday life. "'Feeling Vienna" stands for the many impressions that work on us here. Because Vienna has a bit too much of everything. But not in a bad way, but in the convivial, the Viennese way.

On the one hand, there are the culinary delights of Vienna that carry our palate through the city. From beisl to toque-winning restaurant, from hipster café to traditional coffee house and from street food to slow food. Viennese cuisine is the only type of cooking in the world to be named after a city. Many specialties have conquered the world, such as the Wiener schnitzel with the crispy, golden-yellow breadcrumbs in a cozy beisl, as well as the hot Käsekrainer from the sausage stand on the popular crossroads, or the aromatic apple strudel in the coffee house, whose interior seems to have originated in imperial times. Vienna's coffee house culture has been on UNESCO's Intangible Cultural Heritage List since 2011, but reaches far back to imperial times. The imperial and royal court confectioner Demel still serves Sisi's favorite sweet treat: candied violet petals.

In Vienna, you never enjoy things with just one sense; it's all about the interaction of all the senses and the impressions that make almost everything in the city into a moment of pleasure. For example, hiking in Vienna's vineyards is never solely for the benefit of getting the body moving; you also enjoy the view, as well as the rest and the popular Wiener Gemischter Satz at the heuriger. Thirteen hiking trails within the city limits offer over 130 kilometers for long pleasure hikes. Slowing down comes easily: half of the city is made up of green spaces. These are evident approx. every 250 meters in the form of a park or at least a piece of green. The rose garden in the Volksgarten is located in the city center and is a feast for the eyes and nose from spring to late autumn thanks to the 400 different varieties of flowering rose. Find a spot here, close your eyes, and let the city work its magic on you.

The situation is a similar one when we visit a museum – it's about so much more than just the exhibition, it's the overpowering ambience of the rooms, the smell and abundance of the exhibits, which captivate us. Special museums such as the Naturhistorisches Museum Vienna (Natural History Museum) offer tangible stories – such as, for example, the 150 million year-old fossilized dinosaur droppings. The Hofmobiliendepot. Imperial Furniture Collection is one of the world's largest museums for living culture, and shows how well upholstered the emperor once resided.

There is even more to going for a walk in Vienna: strolling through the city center is about seeing and being seen. After all, Vienna is a city that is worth seeing. The constant contrast of old and new, of imperial and modern, sharpens our senses for the beautiful. Music in Vienna touches us on so many levels. It is always a composition of sounds, impressions, and emotions in breathtaking venues. Music comes into its own particularly well in dance: at the average of 450 balls per ball season, people dance to the sounds of the waltz in three-four time, in adjacent rooms also to electronic music. Sometimes, the music of times gone by is also seen here in the form of exhibitions and collections of historical musical instruments.

Vienna has a bit too much of everything. And that's a good thing. Because Viennese gemütlichkeit turns pomp into pleasure.  The Viennese are sincerely indifferent to the fact that so much happens in their compact city. Because nobody is forced to do anything here, much simply happens of its own accord. The motto is "nur net hudeln" (which translates as "take it easy") and can also be sensed by Vienna's guests, everywhere and at all times.

Alongside the five senses of seeing, hearing, tasting, smelling, and feeling there is another sense – and it's only found here – the sixth sense of the Viennese. It is "sensing oneself" – because when the Viennese feel good, they express it with: "Heit g’spia i mi wieda" (literally, "Hot sensation in me again"). What they mean by this is that they have found themselves again. Life is now enjoyed again and continued with familiar nonchalance.