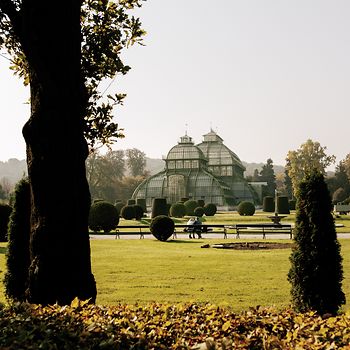 Vienna is a Standard of Living

Life is good in Vienna. What the Viennese have long known to be true has also been officially confirmed several times: In 2019, the Mercer Study voted Vienna the world's most livable city for the tenth year in a row. Vienna also took first place for the second time in the 2019 “Smart City Strategy Index” of the analyst Roland Berger. In 2020, the consultancy group “Resonance Consultancy” voted Vienna the “world’s greenest city”.

The reason for this outstanding quality of life? Vienna has more green space than virtually any other. It is a place where you can relax – there are even parks in the heart of the city – or enjoy sport. And the green offering is constantly being expanded: Since 2010, 204 parks have been remodeled or created from new – that’s equivalent to one new park for Vienna every 18 days. The Austrian capital also has excellent infrastructure and is one of the safest major cities on earth.

Form decorative flowerbeds to unspoiled nature – there is plenty to discover in green Vienna. It comes as no surprise that the Vienna Woods on the city’s western fringes are referred to as the lungs of the city. This 1,350 square kilometer UNESCO biosphere reserve provides a unique habitat for countless plant and animal species. When taking a stroll in the Lainz Game Reserve you shouldn‘t be surprised if a wild boar crosses your path. The Lainz Game Reserve is also home to the largest number of different bat species in Europe. Vienna is, after all, a habitat for people and animals: 456 species of wild bee make Vienna Europe’s bee capital. In summer, an additional 200 million honeybees buzz around the city. At Schönbrunn Zoo you will also encounter more exotic animals, with the baby polar bear girl Finja having been born there in 2019 joined in 2020 by the koala baby Millaa Millaa. The treetop trail gives excellent views of the enclosures. A forest adventure trail here also make the many facets of the forest an exciting and varied experience. There are countless vantage points elsewhere in the city including the Danube Tower, Kahlenberg and Cobenzl, all of which can be easily reached using public transportation.

Mountain bikers, cyclists, ramblers and cross country skiers love the range of signposted routes. The paths take in all kinds of terrain including steep hills and flat stretches along the Danube. For anyone with more time and energy there is the Rundumadum hiking trail (120 km) which lets you circle the city on foot. Or on one of the 12 hiking trails. The latest addition to the hiking trail network in and around Vienna is the Wienerberg city hiking trail. Vienna’s waterbodies also enrich the urban landscape. The New Danube with its large recreation area and leisure paradise on Danube Island as well as the Old Danube draw people outdoors. People swim and sail, and also cycle, jog, and skate here in summer. The Danube Canal cuts through the center of the city and is transformed into a stretch of bars and restaurants each summer. The area is home to the Badeschiff (Pool Boat). You can swim in the Danube here in summer and chase the curling sticks over the ice in winter. Further along the Danube Canal you will come to the Prater, a green space covering six million square meters, which was given to the Viennese by Emperor Joseph II. and is one of the most beautiful city parks in the world. Highlights include the 4.5 km long Hauptallee and the famous Wurstelprater amusement park. Vienna’s trademark Giant Ferris Wheel is also impossible to miss. Farther east is the Lobau, a wetland wilderness in the Donau-Auen National Park.

Vienna’s green cityscape is shaped by around 645 agricultural businesses with an area under agricultural use of approx. 5,700 hectares, of which 32 percent are organically managed, as well as numerous vineyards. These can best be discovered on the hiking trails. Vienna’s vineyards are prized for their internationally acclaimed wine. No trip to the capital would be complete without a trip to a wine tavern where you can sit and leave your cares behind you while enjoying a drop of fine wine. Viennese drinking water has a particularly crisp and refreshing taste. This healthy spring water is yet another reason why Vienna is the world’s true number one when it comes to quality of life. The water playgrounds at the Wasserturm (water tower) and on Danube Island offer fun as well as interesting facts about Viennese water. The water playground on Danube Island even happens to be the largest in Europe.
www.vienna.info